"Black Bread" with Charcoal: Shadows and Doubts about the Benefits 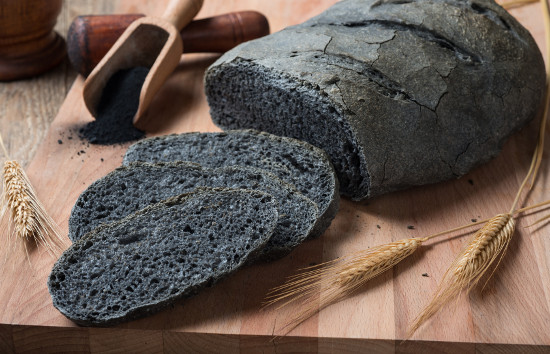 The so-called "black bread", thanks also to its original appearance, seems to have conquered the exhibitorsin bakeries and supermarkets, but apparently the alleged benefits conferred do not confirm in reality.

The preparation of this type of bread, obtained by the addition of vegetal charcoal, is in fact devoid of healthy properties: in contrast to the whole wheat, recommended for those who want to increase the fiber intake.

At least, so say nutritionists experts: “It has as much calories as the traditional bread and charcoal does not give any benefit to the people who suffer from swelling or problems such as irritable bowel syndrome." said Dr. Sara Head, dietician of the Obesity Center of the Humanitas hospital. "The expected amount of activated charcoal for the production of black bread is in fact much lower than that which you could have a pharmacological potential in patients with intestinal problems.”

On the subject, and in particular on the use of coloring E153 in food (also known as activated charcoal), the Ministry of Health rules, stating that it can be used but only in function of dye. It is therefore not possible to mention the charcoal beneficial effects for commercial purposes, in light of the fact that “clearly use the same exclusively as a color additive”.

The legislation in force does not provide a limitaion on its use for such dye, but as stated by the Ministry, must be used "in an amount not greater than that required to achieve the desired effect and that consumers are not misled.”

The note of the Ministry also advises that this product may not be called "bread", or marked with the words "bread" in his presentation in the labeling and advertising, when the product is sold pre-packaged or either unpackaged. Products containing coal will have to be referred as "fine bakery product”.

The evaluations of the European authorities in this regard, state that you can have charcoal and bakery products containing it with confidence. Nevertheless it can not be asserted that the use of coal can bring health benefits as an additive.