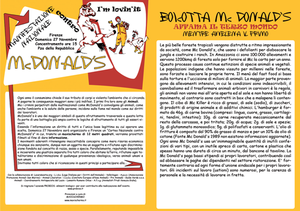 Each year, the consumerism asks its toll of bodies and violent environment that surrounds us. To pay the price are the most defenseless, the first of their pets. But the crimes committed by corporations like McDonald's involving not only animals, but also the environment and health of people, impacting on world hunger and the rights of workers. McDonald's is one of the major symbols of this cross-exploitation, this fight is part of a wider campaign against the logic of exploitation of all living beings. Being information a right of all and the only legitimate basis on which to make a choice, Sunday, November 27 will be held in Florence a "PARADE AGAINST NATIONAL MC DONALD'S" when, thanks to a giant screen films will be screened in order to give information , the concentration is scheduled for 15:00. We invite all those who recognize themselves in these principles or anyone who wants to find out about these issues to participate in the parade. Probios is an Official Sponsor of the event.