Editorial: Milk, Cheese and Dairy, the Myths of Civilization 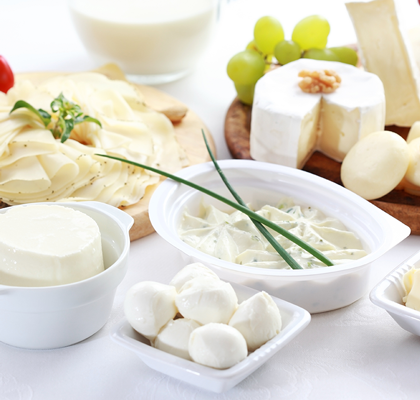 The myth that milk is a perfect, nutritious, natural and healthy food is rooted in our culture since about 150 years, becoming a collective belief to the point that too many people think that man has always been consumed milk.

Much rests on the assumption that milk is the main food of the child and being good for the child it must be good adult, forgetting that in nature there is no other animal except man who drinks more milk as an adult, not even of other species.

There are countless studies showing that consuming milk-dairy products has an impact on health.
Take osteoporosis. If indeed this disease decreases with calcium intake, why in rich countries, where they consume more cheese and dairy products, is so widespread? An article published in the American Journal of Clinical Nutrition (March 1983) reports a study of people of 65 years showing that women who consume animal proteins have a bone loss of 35% compared to women who have a vegetarian diet, which instead have a loss of only 7%.
Osteoporosis has "paradoxically" a larger impact in countries that are major consumers of milk and cheese likes the United States, Finland, Sweden and England. It might be a coincidence, but the first two countries also hold the record for having the highest mortality rate for cardiovascular disease.

At the end of the eighties Paolo Toniolo, a professor at New York University, made a study of 750 women in the Po Valley (Italy).
The most interesting result was, that women who consumed more saturated fat and animal protein, especially cheese, had a three times higher probability to contract breast cancer.
In a study conducted at Harvard University (Lancet, July 1989), on a sample of 145 women, they found that those who ate yogurt and cheese had a three times more likely to contract ovarian cancer. It should be noted that Denmark has an incidence of ovarian cancer six times higher than in Japan, where dairy consumption is very low.

There are many other diseases that have proven to be caused by the consumption of cheese and dairy (I invite you to read The China Study by T. Colin Campbell, the book originates from 27 years of research on the correlation of disease and food).

But the thing that always surprises me is that even if medical authority, such as the ones I mentioned, intentionally "dated", recognized this correlation between animal protein consumption and the onset of many diseases, no one speaks properly?
I think that we rather should inform what eating meat and dairy products do cause. No one speaks of the atrocities committed in factory farms, actual concentration camps, where they are treated with hormones, antibiotics and tranquilizers with food.
Not only. To make a kilo of meat we need 15,000 liters of water and 80% of the grain produced in the world are for slaughter animals and milk production: these grains would be enough to feed 8.7 billion people, while 40,000 children die daily from malnutrition.
At the same time in the rich countries people often die from diseases caused by the abuse of food and drugs. Amazon deforestation is part of this trend. The largest lung we have, rich in medicinal herbs, is being desertifyed for us to graze cattle.

Human beings, as an evolved species on this planet, can gain on all the resources that the Earth has made available, but as long as you put an immense respect.
And only by respecting the planet, starting from respect for its lives, you can help protect the Earth and safeguarding its and our evolution.


The time will come when man will no longer have to kill to eat, and even the killing of one animal will be considered a serious crime ...
- Leonardo da Vinci –