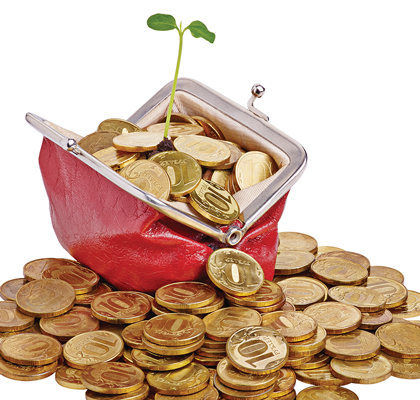 Some will find this statement strange ... almost a blasphemy.
So many people think that money is basically a "dirty" thing. Certain of our religious settings have made it appear as "the dung of the devil." And maybe just the one who presented it like this to us for centuries, then has amassed incredible amounts, abusing it as an instrument of power and control. And that how it happens, in our age of growth of consciousness, which has been led to believe that if something has an equivalent in money, is something that with spirituality has nothing to do with . When it is exactly the opposite: it probably is in the money "thing" that we have available that has more to do with spirituality and with the operational opportunities for growth of consciousness.
In the history of human spiritual money goes back to the invention of the spiritual leaders educated from the higher dimensions, the ones who are the "trustees" of our evolutionary path. The reason was to give humans a powerful instrument of potential freedom. The previous phase, that of barter, restricted a lot the freedom of choice: if a gentleman produced chickens or eggs, he could only exchange them with the products of someone who was in need of chickens or eggs, in a certain time and in a limited territory. If, however, your work receives the equivalent value of money, with this then you can decide what to buy, whether it's fish, a book, a painting, a medicine or an hour of the time of a skilled therapist. Your money will always be useful for those who provide these products and services, while they would not always need - just when you need to - chickens or eggs.
The other idea of the initiated ancients was to provide the mankind with something that for the social body was like blood is to the human body. With the free use of this tool one would put to the test - and one day would grow through experience - the human ability to have a powerful tool for good. But human evolution is done in such a way that, to learn to do well and the goodness, you must go through the error, verify the troubles made by mistake, and then the pain that comes in individual and social level ... Then to learn to do the right thing well, with love and openness to others and themselves. So just the money was placed as a powerful tool for growth through its ability to also be a powerful tool for error and pain. And then experience as you do not use.
And so far money has rarely been used well, and the enormity of the perverse powers that surround us is often caused by incorrect use of the instrument money. If the money is for the social body what blood is to the physical body, that means that it must circulate, that it can not stand still, that one can not accumulate authority at the expense of others. Otherwise, the entire body gets ill. It also means that it is the heart that supplies the pulses ... which is love, the desire for goodness that makes it work in a healthy way and helps distribute it appropriately wherever it is needed. The diseases of the social body are due to the fact that it is the heart, the desire for love and goodness of all and for everybody, which moves, slides or withholds the money. But it is the folly of predation, the false desire of good that makes you believe that the important thing is that you selfishly accumulate money, even if this does not circulate to all other components of the human social body. Without realizing that it is this insane and illusory greed one of the main bases of diseases of the social body of which we are all a part. And in any case turns against us. Although we have accumulated huge amounts of money. Because in reality, with its perverse use and its accumulation we have helped to poison the water of life in which we all of us swim ...
In our short-sighted materialistic age, the lack of a true spiritual perspective has generated competition for mindless accumulation. Our society is moving as if only the material dimension exsists, as if the material possessions gave happiness and you should never die.
As if it counts more than love and joy for inner growth and that of others around us. The finance world, in the hands of dark powers antilove and antihuman, has generated money and financial products in gigantic measure that do no longer correspond to existing products and services. But vastly superior. And this huge egregora, this monster of selfish and predatory money is around the world, enriching the few rich and impoverishing the many poor. As a form that generates illusory power, but also greed, despair, war, hatred, physical and mental illness....As a form of sinister control over humanity.

The money assets and the goods existing on the Earth would be more than sufficient for a decent standard of living of the world population, without pockets of poverty and without depleting the planet's resources. But the accumulation of our self-interest in the use of money, continues to be the basis of a perverse and parasitic power that keeps on right with the continuing and widening imbalances.
Our daily choices in the use of money are at the root of these enormous powers. It’s us who with our money freely invest in certain financial products entirely devoid of ethics, we deposit our money in banks that finance wars and anti-human investments, we buy certain products of multinational companies, certain drugs that are bad for us, certain foods without any life that sicken our bodies and asleep our consciences. We are the ones who make it this system of predation and perverse use of the money possible. But the picture is not quite so dark, but ...
Right in our own era the dream of the ancient initiates inventors of money begins to come true. The awakening of consciences has started, and a growing number of people do not "drink" more passively and uncritically what gives them the power.
And this of course also begins to reveal itself in excactly this kind of a different and more aware use of the money. Those waking up to their conscience want to use it in a better way for the goodnessof himself and at the same time for that of others: he begins to want to somehow "spiritualize". And the money is just the right tool for this operation. Everything depends on our choices. And the good news is that more and more in the era of the awakening of consciousness there is emerging a more ethical behavior, both individually and socially useful:

* the revision of your own „basket“ of expenditure, giving higher priority and importance to the purchase of goods and services that are really good for body and soul;
• the decision not invest anymore money in the socalled „normal“ banks of the great financial circuits, or financial products, which proposes international finance;
• the choice to spend it on goods and services that are ethical, and that do not hurt the body and the spirit, but help and support them in their journey on Earth;
• the decision to use Your own money to help small and medium producers of the ethic economy, which escapes from the great powers of control, in order to grow the tissue of the good practices that slide money-blood of humanity instead of restraining it;
• the decision of spending a little more, as long as this foods are from the healthy biological circuitry, rather than on the agriculture or the food industry that uses chemicals or GMOs; and at the same time giving us and the others we love something that - instead of poisoning them - enhances their vitality, their health and their conscience;
• the choice of products and terapists of the new holistic cultures, providing them with enough money to sustain and expand their businesses; for the benefit of the social network;
• the decision to invest their own money to support artists and forms of art that contribute to the growth of the Spirit;
• the freedom to contribute their own money to support the activities of the development of consciousness, so that these are possible and that a culture of love of the Spirit in matter and in society could spread and gradually replace centuries of predation, accumulation of short-sighted and mindless materialism.

Some people say that money does not buy the Spirit, but it is a new-bigoted and short-sighted vision, that only leaves the money in the hands of the powers of manipulation of humanity, and removes it from the forces of consciousness. It 'very difficult to make good use of the money, escape the selfishness, to the temptations of our inner side of predation, but also overcoming this difficulty is an integral part of our journey of development. It 'a battle that we must overcome, if we do not want that money continues to be predominantly the club and the cage used by the power to enslave us. The money, brought to its more ethical and noble function, is the ideal instrument of our freedom to choose the best for our bodies, for our earthly consciousness and our immortal spirit.
Money as important and powerful tool of Love, our genuine desire to goodness.
It just depends on us, how we want to use it.

Fausto Carotenuto
President of Consciousness on the Net